In 2016, there were about 2.6 million annual usage of fillers which had risen from 1.8 million in 2010. And as the use of cosmetic fillers becomes popular, the use of sharp hypodermics is slowly diminishing. The blunt tip cannulas are now gaining momentum. 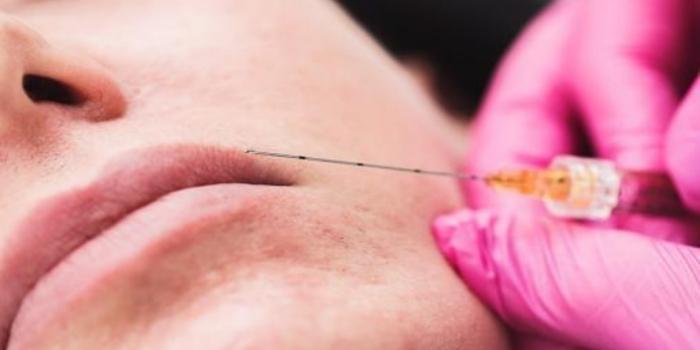 Though many physicians still use sharper-tipped cannulas because they assume it is more accurate, safer, and easier to control, this is not necessarily true. The blunt tip cannula’s angled needle design allows for smoother injections and higher patient comfort, especially when injecting the nose.

So which one is the best? The decision is yours. So, read on to find some convincing facts about the two to help you decide.

Cannulas are blunt tipped metal tubes with a lateral port that you can use in place of needles. They are about one inch, hence covering a wider area during treatment. Before cannula treatment is done, needles prick the spot, then the insertion is executed.

Cannulas differ from needles, and the striking difference is the tip. Needles are sharp, while cannulas are blunt. And that’s why needles cause a lot of swelling and bruising after treatment. However, they all have different roles to play according to the treatment. Let’s keep unfolding! There’s much to learn. 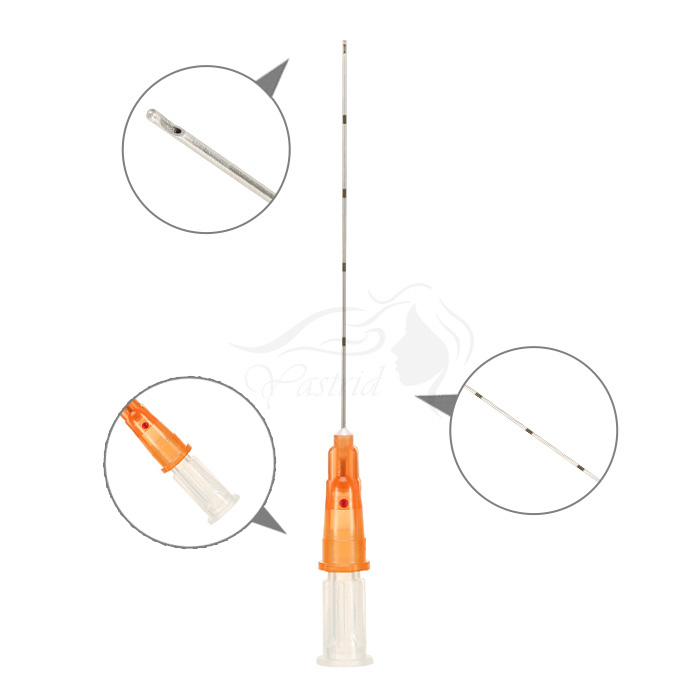 1. Precision in Needles vs. Cannula

Though sharp needles have an increased risk of bruising, their injections are precise. And that’s why it makes it easier for doctors to target and inject the fillers in the exact location. Although with needles, there are higher chances of spread if the filler rises with the vertical movement of the needle.

Cannulas, on the other hand, are long, and insertion is via a slanting position. The good thing is that it restricts the substance being used at the exact level of injection. But these longer needles may reduce backward movement in the path of the needle.

2. The Efficiency of Cannula vs Needle

While both needles and cannulas are efficient technologies in lip augmentation, dermal filling Botox, etc., there’s a striking difference too. And according to Dermatologic surgery research, patients indicated a 12% better experience with cannulas than a needle injection.

Blunt tipped cannulas indicate enhanced efficiency in volume with little downtime. However, the two have made progress in ideal situations although the results eventually rely on the physician’s expertise. If done well, both needles and cannulas will result in similar aesthetic outcomes.

Besides, blunt tipped cannulas are more comfortable than sharp needles.

However, cannulas can cause some level of discomfort as it moves through the soft tissues which can result in vasovagal reaction. So, talking about the experience with the patient before the procedure may help in their preparation.

Cannulas have impressive structures. Though they may require many filler injections sessions, they’re perfect for intensive treatment.  Cannulas are flexible and can maneuver the soft, delicate tissues of the skin. Therefore, they’re used as lip fillers and tear troughs, as most of these are done with a single injection point that cannulas allow. Also, they have advanced perfection with dermal sites, which ensures a non stop flow of fillers to the spot.

Furthermore, there’s still an irresistible majority of cosmetic surgeons picking on sharp tipped needles. And here’s the reason why. Sharp tipped needles are very accessible and are very precise. Needles are still suitable and perfect for quick touch-ups and localized filler sites. For instance, acne scars only need a little number of fillers, and needles are appropriate for this.

4. Are the Skills Needed in Needles and Cannulas Similar?

Cannulas are a bit technical. While a needle needs a mere pierce, you need some meaningful level of feel to use cannulas.  Since sharp tipped needles are fine, they fundamentally are a force multiplier. They require a little force to pierce through the skin.

And given that cannulas are slightly expensive and have a difficult learning curve, their usage remains minimal by the practitioners.

5. When to Use Sharp Tipped Needles

The dermal filling has existed since the 1970s, all this while hypodermic needles were dependable in the dermal filling. In fact, when you go for a dermal filler course, you’ll find most cosmetic dermatologists using them as the primary tool. For that reason, sharp needles are more easily accessible than cannulas.

Therefore, most instances where sharp tip needles are used are when:

And that’s how sharp needles become advantageous to cannulas. Even as mentioned earlier, sharp tipped needles are more precise, making doctors choose them more for facial sculpting and placing fillers near the bones.

Another advantage is they have a reasonably candid procedure since a needle goes direct to the injection site. Besides, their small sizes often allow for more accuracy and control. For instance, treating the fine lines on the lips need a light hand for delivering tiny substances pretty shallowly; apparently, a cannula cannot allow for such a level of control.

However, needles are risky too. Since they have sharp tips, the likelihood of operative trauma is high.

This is because they’re likely to rupture blood vessels as they traverse through the skin layer which increases the risk of intravascular injection.

Also, needles pose a threat to the arteries and other blood vessels. They are highly likely to puncture arterial walls. And this makes the injection of delicate areas complex. So, for better-desired results, it’s advised to evade parts with thin skin or stop a painful procedure in dermal filler training because it may result in a punctured artery. And any disturbances in blood flow cause mild to severe problems such as bruising to vascular occlusion or tissue necrosis, respectively.

6. When to Use Cannulas

While cannulas have existed for a long time, they aren’t as old as needles. It’s only recently that they’ve been introduced to replace needle fillers. They were made to address the post-operative complications caused by the hypodermic needles.

Therefore, since they cause less discomfort and pain than needles, patients are being advised to choose and use cannula in more contemporary cosmetic practises. But to use them, one needs to understand their safety, size, shape, and direction.

So, cannulas are used when:

Well, as you’ve read, the cannula is very advantageous too; patients experience no post traumas and infections. Cannulas are flexible and accurate; they avoid all blood vessels and any intricate areas of the skin. They force through the skin setting aside the blood vessels to the filler site without puncturing nor causing bruising and swelling.

Besides, cannulas are preferable to use on soft skin as they smoothly glide which makes them perfect for tissues and skin areas that swell easily. After the operation, there’s no need for therapy. You only need to rest for a day with no tireless activities, and any node will disappear.

Although cannulas are perfect, they also have their downside. Cannulas need high expertise for efficiency. Cannulas need no force as they might bend and or break it. Furthermore, practitioners are required to undergo rigorous training and learn more about facial anatomy before using the cannula method.

Structures of Needles and Cannulas

Cannulas and needles vary in structure, and that’s why they have different recovery times and side effects. Here are their varying designs. Cannulas are:

Patients play a significant part in determining which is the best method. While needles are rigid and might result in severe side effects, some patients would still prefer them. Additionally, patients with a high threshold for pain and are accustomed to the procedure will choose them anytime! And patients that cannot contain pain or are going for the dermal fillers or Botox treatment for the first time would obviously choose the cannula method.

Tissue Swelling by Needles Vs. Cannulas

Though doctors use varying methods to alleviate side effects of dermal filling, patients still differ and respond to injectable fillers differently. While some have completely no swelling with needles, others experience swelling.  Also, some will experience insistent swelling with cannula methods, yet some may not.

However, an extensive postoperative recovery system could be helpful to lessen such and much severe cases. You can get medications before leaving the medical spa or further visits when you notice continuous swelling. Meanwhile, you should administer medications immediately in case you experience pain, swelling, blemishes, etc.

Micro-needling is a minimally invasive therapy that induces collagen production through repeated punctures on the skin by tiny sterilized needles. It’s also called derma rolling and is often muddled with derma filling. Microneedles use needles, though slightly different from the standard needles and cannulas, to treat scars, wrinkles, and aging skin. They aren’t any technical, and even patients can use them at home with advice from their doctors.

Meanwhile, you can combine microneedles and dermal fillers in medical anesthetics.  In fact, the combination results in more radical and faultless results.

Can you Combine Needles and Cannulas?

As stated earlier, microneedle can be combined with dermal fillers, which means cannulas and needles can be connected too for perfect results.

However, medical practitioners reserve the right to choose whether to use needle or cannula.  According to the patient’s needs, different practitioners will vary in the options and adjust accordingly depending on how patients feel.

Where Can You Get Needle and Cannula Services?

Needles and cannulas services are offered in numerous aesthetic spas. Cannulas especially are very common. Most practitioners find them more useful than needles. They see them as swift and a necessity in medical aesthetics and the best alternative to hypodermic needles.

Now, where can you get these services? Yastrid Medical Aesthetics is the place for you. It is a global distributor of microcannula, dermal filler, mesotherapy needle, multi-needle, etc. And so, whether you are looking for any cannula and needles, you can source them from here. Besides, with top-notch 24/7 services, you are guaranteed the best. Apart from it, we have others such as Facethetics that’ll offer you training in both cannula and needle injection technique. So, gain the confidence and find your best fit!

As cannulas become more and more known and preferred in medical aesthetics, needles are still being prioritized. Remember that while cannulas treat a large area from one insertion, are less painful, and have a brief downtime, both cannula and needles have the same aesthetic results. In fact, the best results have been seen with a combination of the two.

When you visit these medical spas, you’ll realize that both are still in use. Medical aesthetics companies like Yastrid offers both sharp tip needles and cannulas affordably with excellent services. So will cannulas ever replace these sharp tip needles? Do you fear experiencing pain? Are you one that endures lots of pain? Well, you can now make the best decision